MoCHIP, under the direction and supervision of State Coordinator Brad Fowler, has ID’d 513 teenage girls at the Missouri Girls State Meeting held June 25-July 2 at the University of Central Missouri. Why is this such an accomplishment? According to the National Center for Missing and Exploited Children (NCMEC) GIRLS ages 11-21 are statistically most susceptible to become missing—and MoCHIP has successfully ID’d the largest group of young ladies that would most likely go without—a 10% increase over last year.

By parental definition, teenagers are borderline adults that know everything, fear nothing and defy the odds at every turn. Our teens are venturing out into a world where they are making their own decisions. All a parent can do at this time in life is, in short, trust that they’ve armed their children with a lifetime of safety and ethical discussions, monitor their activities and devices, and prepare with a child ID packet should the unimaginable ever occur and the child goes missing.

Nearly 2,000 children are reported missing or abducted in the United States each day. The U.S. Department of Health and Human Services estimates between 244,000 and 325,000 American youth are considered at risk for sexual exploitation, and an estimated 199,000 incidents of sexual exploitation of minors occur each year in the United States. The average age at entry into commercial sex or sex trafficking for girls is 12-14 years old.

MoCHIP has been tested ten times in Missouri that we know of, with every one of those children returned home safely to their families. And though we cannot release details about the recoveries, each of the ten children were between the ages of 11-21. To date (since August 2005) MoCHIP has held 1,390 events and has ID’d 230,243 Missouri children. The peace of mind MoCHIP provides to Missouri families is invaluable.

Once the child/teen is processed through the program, which generally takes only 15 minutes (less if the MoCHIP ID is being updated), the parent is armed with a single pre-printed envelope that instructs authorities in the event of an emergency, something a parent in crisis would undoubtedly have trouble with, and a proactive measure to combat the time sensitivity involved in recovery. Within a matter of minutes the MoCHIP CD can be loaded into a computer directly from a police officers automobile and entered into the Amber Alert system.

Excellent job and another huge milestone for MoCHIP. 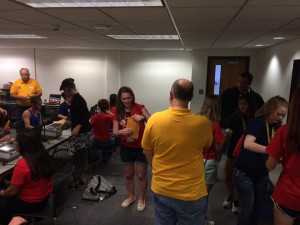